For a long time now I've been enthralled with the image of Scheherezade the story teller, telling stories not just to save her life, but to save the lives of her sisters, all of whom King Sharyar wants to kill, in revenge for his first wife's infidelity.

But Scheherezade's project is more complex even than that; she is making love, both literally and figuratively, while she's weaving her tales. So storytelling and sisterhood (or political or social activism of any sort) and wily ways are all connected to the great human theme of love. What more could you want?

I got the bug and have now written two series of interconnected stories. The first centers around a family at the turn of the last century but one--1900. The family owns a shipping business in Boston and lives in Cambridge. Visitors from around the world come to the house and tell their stories; at other times the children, brother and sister, whisper tales to each other late at night, via the heat duct that runs from one bedroom to the other. There are stories of their father's youth in late 1800's Paris, and the woman whom he loved there; one direct from India in real Arabian Nights fashion, the story of a frustrated lover who must wander the world before he may return to his forbidden beloved; stories of old New England, trappers and carpenters and witches who live far away from the towns, visited only by Indians and renegades.


The second story cycle is closer to home, and is the collection of stories told to a young girl in her dreams, by the boy who has died and given his heart, literally, to her. He tells her stories to keep her alive, and thereby takes her to magical places full of fairies and talking animals and enchanted forests. 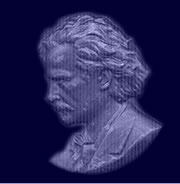